A notebook bulletin board
tacked on when randomly bored
applied thoughts in a scribblebook
open for the world to look who passes by
so fast to see like a needle in a haystack we
safely stash those innermost secrets thought to be
at least you see languishing up and into pristine
blossoms for you to pick and sniff and hope
they don't make you sick.

Towards a New Science Fiction 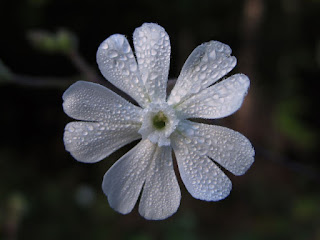 Silene, the flower that was frozen since the Ice Age
Picture: Jacinta Lluch Valero

It's going to be necessary for us to understand the pages we're on together and apart--to differentiate between the pages we're reading and the one's we've already eaten and digested readily for so long, we've already paved the calcified gutters of our literary community with our own sedimentary excrement. When our golden yearning for the stars came from youthful innocence--that was one thing--and permissible, to a point. Now that we've all grown older together, if one can't see the stars themselves represent the tangible beauty of death shining out loud in the eternal dark, like diamond points reminding us human mayflies out here on this lonely periphery just how much time has been really left for us all, then I'm sorry, but I can't join one on their beautiful quest for a colony on Mars. But I do wish all those who venture with such daring my very best. After all, our limitations should be boundless in the cosmiverse.

The isolated frontier of existence relates from our own angled lines of perception stemming from the inverted reflection cast off the back of our retinas and bouncing off the coronal apex of our event horizons, not onward and beyond our solar system into the glimpse of a premature death, but rather, refracted back inward down through our atmosphere and deeply further into the microcosmic membranes of our blossoming world here and now. The blessed balanced moment poised on eternity's cusp.

Just like the question of whether extraterrestrials exist, we cannot begin to hope we could understand each other unless we've all been qualified together as to the usefulness of the proper application of such terms in the first place. It would serve us well to agree that comprehending the alien flies in direct contradiction to what that word implies. Anything alien to us by definition could not be even conceived as having anything familiar to our sphere of awareness, therefore rendering the quintessentially 'alien' as a philosophical concept at the least, or a sort of  'spectrographic-beyond-our-frequency' idea at the most; either way, although it may remain interesting to wonder whether it could even be possible to have a translation of the alien rendered into terms humans could begin to comprehend, just as surely, if we chose to, we could opt to not aspire to waste too much of our time and energy earnestly contemplating the possibility of, say, breathing solid rock for instance (not that such an allegedly preposterous notion couldn't necessarily hit pay-dirt) and neither would we necessarily bother to waste valuable life experience on further pursuing any notion of the alien whatsoever--if we can agree that the secondary definition of 'alien' were to be applied roughly as "life forms operating on such an inherently different system than ours as to remain altogether unrecognizable to us."

The extraterrestrial posits another matter altogether: that of scale, and our tendency to limit the scale upon which we really exist. We like to think of our own planet as the totality of our location in the cosmos, and therefore it may escape us that sentient hominid beings very much like ourselves could be common throughout all galaxies in the universe, for all we know. Such a distinct possibility could render Homo sapiens sapiens of Earth in actuality the common denominator for most advanced civilizations across the universe.

From what I've been able to gather, my own contemporary's apparent unwillingness to accommodate for such a normalized possibility as this may be relegated to a lack of imagination, or perhaps mere apathy has seized the lot, or maybe we're all too distracted staying focused on what lies directly ahead of us to bother with such notions, I can't tell for certain. As for myself, I concurrently dream of our golden aspirations to the stars, but not without a slight degree of bitterness, as I gaze out my window toward the trees' outline against the backdrop of night.


I feel certain now that this, our home planet Earth, remains the single most important, vital element in all of our daily lives regardless of how much psionic energy may escape us in the form of frustrated ventilation through dreams. That a good portion of us take those fevered notions and enact them proudly throughout our lives to gain the notoriety of honor among men remains something that I neither dismiss nor neglect to apprehend in my own daily rituals keeping up with the pace of the modern world. Let's just say, to keep it simple, that I try not to think about it, that much. The looming human bulk, encroaching as an ever growing shadow at dawn. If anything, it helps spur me to my feet.

I can't help but see the zoomed-in microscopic world of our human microbiome, along with the mycobiome--into the seething cauldron of the ongoing eukaryotic and prokaryotic dance of evolution that has been ongoing inside us from the beginning. Our realm of neural pathways remains intrinsically connected along a complicated unfolding web work of synaptic leavenings whose sum effect, besides playing key roles in producing ourselves, and our progeny, on a chaotically resplendent world of titanic opposing forces constantly clashing to create order from the storm, seems to be the consequential inflicting of this wonderful and harrowing thing called imagination on us, which, as true to the source-code that inspired it, reflects both ways, as it were, and like the proverbial double-edged mirror image, cuts one only to have them not notice the bleeding until it's far too late to stop it. For these and similar reasons, the fashion to carry on "blind" throughout all this disturbing history has grown stronger among men, or so it seems to me. Until comes the day that blindness itself so entirely consumes the race of men, that their ordinary 'day-sight' becomes mistaken for 'true-sight'.

shaun
so many dead lines. remote scanning for the few live wires. feeling in the dark with hands bound. look what i have found. All my poems © shaun a. lawton I am the editor of the Freezine of Fantasy and Science Fiction