A notebook bulletin board
tacked on when randomly bored
applied thoughts in a scribblebook
open for the world to look who passes by
so fast to see like a needle in a haystack we
safely stash those innermost secrets thought to be
at least you see languishing up and into pristine
blossoms for you to pick and sniff and hope
they don't make you sick.

Just suppose that I've hit upon the bull's nose here, try searching online for the answer to the question of whether we have detected radio waves here on Earth or don't - ("Yeah - it's called X-96 Maaan") - you won't find anything except for entries to the Fermi Paradox , FAQs about SETI, and the usual stuff about far away radio signals from other galaxies.


This brought up the rectenna:  a device for converting radio waves to electricity!


I may have my answer to Fermi's Paradox!

"Everybody is in the form of longer wavelengths - i.e, radio waves."

"If we could somehow convert those particular radio waves, by rewinding them until they were shorter in length, they should eventually be rendered back into visible light images, should they not?"

Note: This blog was initially set up for the purpose of a NOTEPAD—that is, a way for me to put ideas up off the cuff, for future utilization in whatever creative writing endeavor I might undertake.

For this reason I provide a reminder here as a disclaimer:   the following notes represent my best efforts at "thinking out loud" and therefore, you should follow along at your own risk.   In essence, this entry represents a sort of raw or untamed exacerbation of related ideas competing for cohesion in my mind.  Thanks for understanding.  I offer this in case you have any input—that's what the comments section at the bottom are for. Any help towards comprehending the nature of what I've written about would be much appreciated.  | The author. 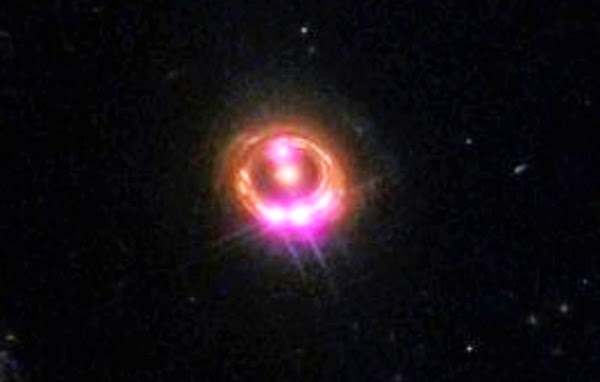 Excess emission from an AGN -  could potentially signify that quality which makes a galaxy adult -  or fully formed - having acquired a quasar and become active, in other words.

If we were to apply the principles of inversion with delicate purpose:

—We might infer that "the AGNs more correctly host us."  ~

(We should keep this possibility in mind while we proceed.)

For centuries these adult "active" galaxies have had the highest redshift of any known stellar objects - being the brightest known things in our night time skies.

The early universe featured many more active galaxies than we find today...

(Because observing the peripheral focal line of a gravitational lens presumably reveals the next stellar object in our "field of vision.")

[It seems to me that gravitational lensing may be part of the answer involving the misguided question to the so-called possibility of "time machines" - (that instead of transporting us to, may only allow us to glimpse into the past or the future -?)   Perhaps, these conceptions of 'past' and 'future' we've come up with - do not exist in realspace irrelative to ourselves.   These conceptions may be more like primitive, or child-like, if you will, projections by our curious and more naive natures.  They're like wild stabs at the truth, and although bound to 'hit' their target partially (for truth is everywhere) - they miss the remaining totality - (those parts that avoided being 'stabbed' with our single-mindedness).  This process may keep us in the dark, more than illuminating it.    This form of untrained speculation inherent to growing organisms naturally ends up occluding more than it reveals.   For it is not so much that such conceptions as 'space' and 'time' exist as we might imagine them to - but, that which we cannot imagine lies spread out before us as reality, in fact.   Our capacity to imagine may even stretch towards the infinite, yet even as it does so, it easily loses grip of 'realtruth' on wild tangential journeys of speculation whose erroneous conclusions are achieved before that which is really happening may even be touched upon.]

)Stare into the abysmal mirror at the fractal of zero(

[The reason a time machine may not be capable of existing has more to do with our misconceived take on the nature of time itself - which a theoretical "time machine" is predicated upon - than any lack of cutting edge scientific experience.  Inventing a time machine would be similar to inventing a method to digest food without having to eat it - as if we'd forgotten that consuming the food in order to digest it ourselves was the original point. "We are already traveling through time" appears to be one minor reflection of why or how time machines as we have imagined them cannot be constructed - we or perhaps this universe or galaxy or solar system itself are already time machines of a sort.   It's like living on an airplane and one day wondering if there wasn't a way to invent an airplane.   Perhaps a bad analogy as it offers the tantalizing possibility of flying while flying....a telescoped presumption - but hopefully my meaning is clear.   We are constantly digressing down the slope of our abject dream. To dream of flying while flying may be a disease and not necessarily an aspiration....]

[More to the point.  These conceptions we have come up with and project over the mantle of that which we perceive to be our reality - -i.e, time and space and everything in between— are really the complicated aspects of phenomena concerning our perceptions of the refraction of light itself in all its undue manifestation.   For light must be the electricity by which we conduct our affairs here in this open realm of super generated gravity wells spun out in the almost impossible-to-map webwork that comprises our expanding universe. ]


Sagittarius A is a complex radio source at the center of our Milky Way Galaxy.  It is comprised of three distinct components:

(This is speculated to be the location of the supermassive black hole at the center of our own galaxy.  Whether or not this makes Sagittarius A* out to be a "Quasar" or analogous to one - I don't know. It seems likely.)


Naturally occurring radio waves are made by lightning, or by astronomical objects.

What radio waves are -  They are a type of electromagnetic radiation whose wavelengths are longer than infrared light.   They have frequencies from 3 kHz to 300 GHz.  This displays wavelengths from 1 millimeter long to 100 kilometers long (62 miles).  They travel at the same speed as any other electromagnetic waves - the speed of light.

(All that "light" happens to be - is that electromagnetic radiation which happens to be visible to the human  eye.   It is responsible for our ability to see.  If you've followed this far—are you being able to SEE what I've been getting at, here in this impromptu essay?)

}speculation{
IF light with its shorter wavelength (but not too short!) is responsible for our ability to SEE, then longer wavelengths (aka radio) are responsible for our ability to _________.  Is the proper word for this analogy "HEAR" -?   Is there then a corresponding electromagnetic radiation for each of our five senses? [I doubt it.] Perhaps the micro-electric sensations of touch, the chemical-electric sensations of taste, the radio waves of sound, or the electro-nerve impulses of smell?  [Nice idea, but...*]

By virtue of differing electromagnetic spectra, each one of our five senses may be "triggered" into response:   If visible light grants our SIGHT, I need to map out the hierarchy of the remaining four senses to see how they may fit into each other, nested or otherwise.
}/end speculation{


There appear to be SIX forms of electromagnetic radiation besides our own of visible light.
*In between* each successive demarcation [excluding our own] are five gaps:


{We may potentially insert each of our own 5 SENSES in between these spectral wavelengths.}


[In between INFRARED and ULTRAVIOLET lies the spectrum of VISIBLE LIGHT - from which either ALL 5 of our senses operate outward - or maybe just vision alone does{?}.   This should be studied further. /end cont. speculation]

If a quasar is a source of radio waves - or - waves longer than those we can see  - - could this possibly be referring to nothing more than the necessary distance (for example, a segment roughly equivalent to the radius of any given galaxy)  sufficient to serve as being long enough to produce wavelengths we are incapable of seeing?  This would imply that perhaps radio waves start out shorter, and then lengthen across spacetime; something I didn't think was the case, but now remain uncertain if we're even capable of establishing here, on Earth, from this distance.

In other words --  if we were by an order of magnitude CLOSER to the source of these radio waves -- would  we THEN be able to see them?


Q: IS THE ONLY THING 'MASKING' POTENTIALLY 'VISUALIZED' ASPECTS OF OUR UNIVERSE  [SUCH AS WE FIND IN AND AROUND OUR IMMEDIATE VICINITY HERE ON EARTH] THE DIFFERING LENGTHS OF THESE VARIOUS ELECTROMAGNETIC RADIATIONS IN RELATION TO THEIR PROXIMITY TO US?

Q: Could it be possible there is life invisible to us where waves lengthen - if only we could approach closer to them thus shortening the wavelengths - making it an option, perhaps to suddenly "tune in" visually to their existence via the proper signal converter?

We may currently speculate on the possibility that distant and longer electromagnetic wavelengths  [ such as RADIO, MICROWAVE, and INFRARED ]  may in fact signify phenomena identical to our own which VISIBLE LIGHT wavelengths allow us to see—except—their very distance from us  renders them longer and therefore no longer visible to us, who happen to be located at this sufficient distance from them.

Begging the question:  IF we were capable of merely approaching closer to these sorts of wavelengths—perhaps we could then of a sudden "SEE" them as "visible light" the way we do so here. *  (i.e, What or how we perceive may all be relative to our proximity to what we are trying to perceive in time and space).

*Necessarily begging the smaller question:  perhaps *relative locality* of any given potential species in our universe, in search of each other, amounts to having more to do with the limitations of our perceptions than anything else.

Perhaps there is a reason for our "astral nearsightedness."

Maybe our galaxy (evidently barren of life to our searching eyes) is in fact teeming with all sorts of advanced civilizations.

Perhaps they remain invisible to us due to no other reason than the relativity of our positions to each other. 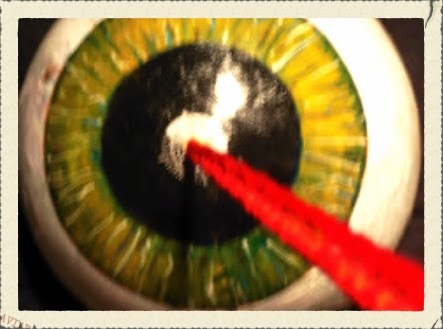 The corresponding electromagnetic wavelengths may perforce transform each kinetic "bulls-eye-spot" where life actually does exist into its own effectively hidden oasis of visible light.  Meanwhile, farther away "oases of life" (such as our own to distant life-forms) are rendered back into radio waves.

This natural process may be cloaking cosmic life-forms in our own galaxy that are in the process of searching for each other.  Distance alone may have effectively barred them from viewing one another in their respective classical senses.

Seen from this viewpoint—this insight may provide the necessary clue for an altogether improved search for extraterrestrial life-forms.  It may have something to do with translating longer wavelengths back into shorter ones  in order to simply "tune in" on these differing bandwidths of life existing around other stars.

I suspect the only way of glimpsing other extant civilizations from our standpoint would be analogous to processing their emitted wavelengths until a sort of "photograph" were exposed for our examination.   Perhaps we should be trying to figure out how to translate radio waves into photographic impressions.

To cut and divide
and separate into
pieces for knowing
(Science).


To knead from clay
and feign or fashion
something imagined
(Fiction).

shaun
so many dead lines. remote scanning for the few live wires. feeling in the dark with hands bound. look what i have found. All my poems © shaun a. lawton I am the editor of the Freezine of Fantasy and Science Fiction